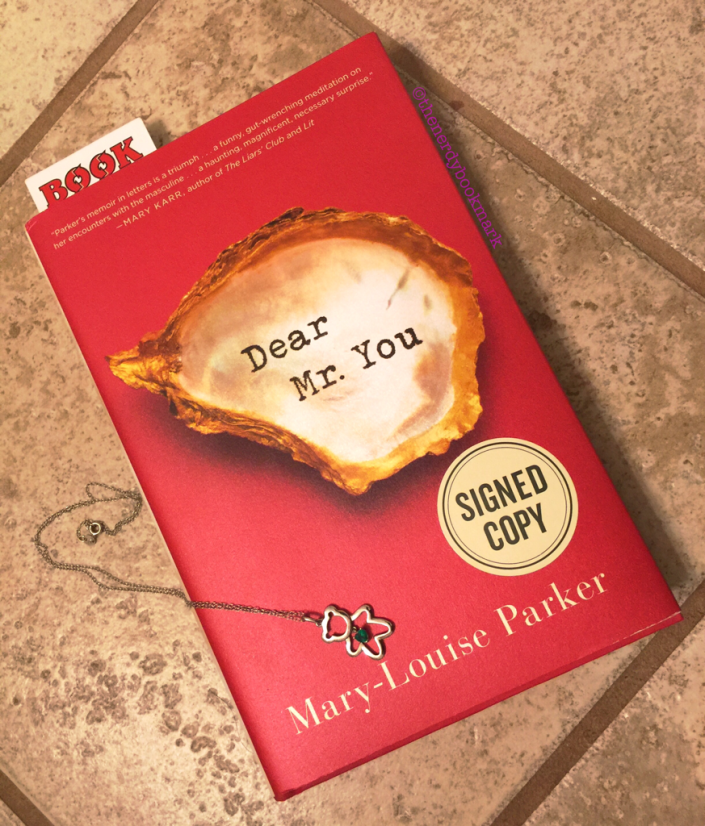 An extraordinary literary work, Dear Mr. You renders the singular arc of a woman’s life through letters Mary-Louise Parker composes to the men, real and hypothetical, who have informed the person she is today. Beginning with the grandfather she never knew, the letters range from a missive to the beloved priest from her childhood to remembrances of former lovers to an homage to a firefighter she encountered to a heartfelt communication with the uncle of the infant daughter she adopted. Readers will be amazed by the depth and style of these letters, which reveal the complexity and power to be found in relationships both loving and fraught.

Hmmm… this book was not quite what I was expecting.  I kind of went in to it thinking it would be a little more comical than it actually was.  None the less, it was still a good book.  Just took a minute to readjust my mood towards it.  Now reading the synopsis on GR might not lead you to think this book may be funny, but on the book itself with words like “gut-wrenching” and “hilarious book” you can probably see where I got confused.  Also being I like her as an actress, I got the humor thing from that as well.

But this book wasn’t a complete fail in the funny department.  For example:

That one had me dying!  And that’s the tune I thought this whole book was going to play.

Other than that slight disappointment, it was a very well written book.  Very emotional and private and a great glimpse into an wonderful actress’ personal life.

One last thing:  I would love to thank her or whoever’s decision this was – as beautiful as you are Mary Louise Parker, thank you from the bottom of my heart for not slapping your celebritorious mug across the cover. 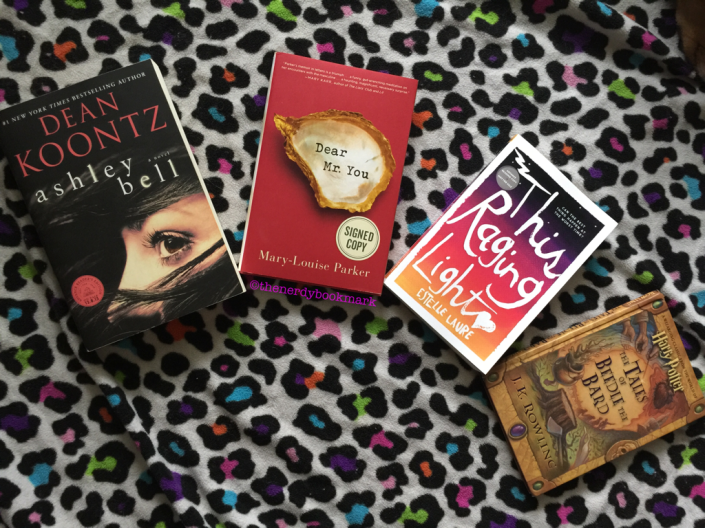 Yet another uuuuberrrrr slow month for reading.  Between the holidays and work and other lifey things there just wasn’t as much time as I normally have to devote to this wonderful world *le sigh* (yes, I repeated last month – what about it?)  Also, I forgot I never posted a review for Dear Mr. You so be on the look out for that!

With that being said, here’s my sad, little finished reads for the month of December:

Hope you guys have a safe and wonderful New Year!  Here’s to a year full of books! 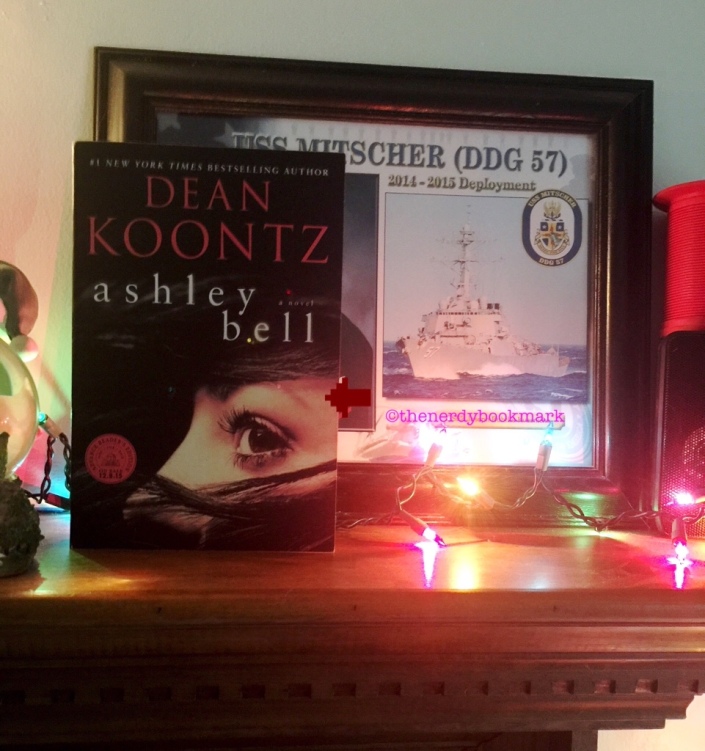 At twenty-two, Bibi Blair’s doctors tell her that she’s dying. Two days later, she’s impossibly cured. Fierce, funny, dauntless, she becomes obsessed with the idea that she was spared because she is meant to save someone else. Someone named Ashley Bell. This proves to be a dangerous idea. Searching for Ashley Bell, ricocheting through a southern California landscape that proves strange and malevolent in the extreme, Bibi is plunged into a world of crime and conspiracy, following a trail of mysteries that become more sinister and tangled with every twisting turn.

**I would like to start off by saying that I received Ashley Bell by Dean Koontz for free via Random House Publishing in exchange for a review.  Although I am super grateful and excited for any opportunity at receiving a book for free, I am also very strict with being honest.  That being said, giveaways do not impact my reviews.**

I would like to start this review by pointing out that this is my first Dean Koontz book – ever.  Being a first time reader of his, I was not left disappointed.  This book was fun to read and I love the use of vocabulary.  I was given plenty of new words without it taking away from the story.  I can’t stand when author’s try to get to fancy with their words.  This book starts off with the first 100 or so pages basically reiterating the jacket description.  This is what makes this book so interesting because from there on in, you’re taken for a ride of dark turns and crazy loop-de-loops!

That being said, I’m kind of happy that I can’t quote this book being the copy I have is an ARC, otherwise half of what I’ve read would be quoted already!  There were lots of clever/relatable moments that I think many people will agree with.

This book has short chapters – THANK YOU!!  Sometimes when I read, I get interrupted – a lot.  Sometimes I can’t read as much as I was planning.  This makes for an easy put down and an even easier picker backer upper (? this makes sense in my brain lol) this allows me to always know where I leave off and remember what happened.  I really can’t stand when I’m forced to stop in the middle of the chapter because the chapter is 40+ pages long.  I usually have trouble finding where exactly I left off so I end up rereading several sentences and then once I find my place, it takes me a minute to remember why I’m reading what I’m reading as opposed to starting from the beginning of a new chapter and having it start anew or recap for me.

Not only did I love the chapter break downs, this book was written from multiple POVs jumping from adult Bibi to young Bibi to her husband Paxton…. which was done so well.  It’s by no means confusing.  It’s clear who you’re reading, whose perspective and you remember what happened the last time you read as them.  Very well done as this can get confusing real fast and make for an unenjoyable read.

And not that this is relevant to the story but I enjoy the size of the book.  It felt good holding it and added to my experience overall.

This book comes out tomorrow, 12/8/2015 and I HIGHLY suggest you grab it!  Even if you’ve never read Dean Koontz like myself, get it.  I will definitely be looking in to more of his work after this.

**FUN FACT:  This picture was purposefully taken next to a Navy Ship (my husband’s in the Navy) – Bibi’s husband Pax is a Navy SEAL so it was only appropriate 🙂 *I’m combining my reviews for Episodes 1 & 2 because Episode 1 was so short, it would be silly to make it stand on it’s own*

A genie’s life is full of wishes – the wishes of those who own him, that is.

When his owner, the powerful yet ugly witch Ezemelda, is called to celebrate the coming-of-age of King Nruk’s daughter, her prophesy of the princess’ future goes against everything Nruk desires. Promising a special spell to reverse the curse on the princess and change her future, but won’t cost him a cent, Ezemelda has more than the future of the kingdom in mind.

What’s the cost of signing a contract with a witch?
And, what does it mean for the genie of the lamp?

**I would like to start off by saying I received both copies of The Witch’s Kiss Ep. 1&2 for free via a LibraryThing member giveaway in exchange for a review.  Although I am super grateful and excited for any opportunity at receiving a book for free, I am also very strict with being honest.  That being said, giveaways do not impact my reviews.**

This novella was crazy fun and fast read (only 25 pages)!  It reminded me so much of old fairy tales having involved creatures from witches, dwarves, goblins, genies and more to involving concepts such as dark and light – so many ingredients make for a fantastic recipe!

But with that being said, it had a nuisance that I can’t ignore: the main character’s name –  Ezemalda.  This reminds me way too much of Ezmerelda so every time I read Ezemalda, I had to correct myself because I always read it as Ezmerelda.  Ezemalda sticks to the tongue.  Too much work for a main character’s name.

Other than that, very entertaining – was excited to read the next episode!

This book started with promise and completely lost it’s way which really bummed me out.  I will not be continuing on to the third episode at all.

Let’s start off on a good note, as always:

I adored the repository!  I wish I could find books in a bookstore by calling out keywords and having books just fly to me.. that would be glooorious ❤ 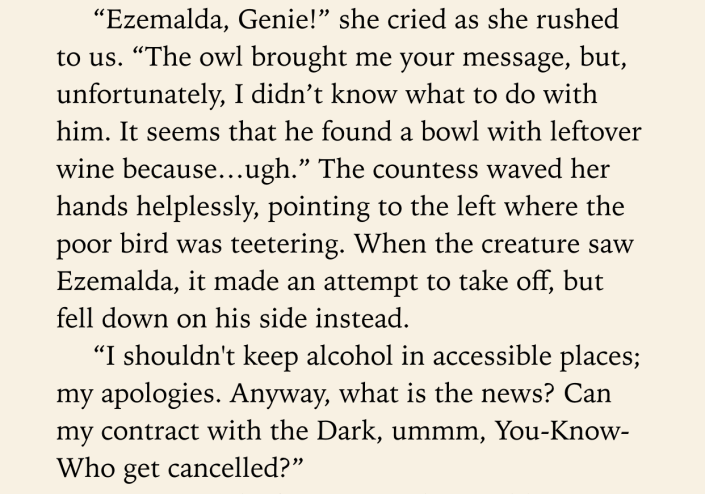 This episode had a nice twist to it though, involving the moon clause.  Nooooo!  I felt so bad haha but I won’t ruin it for any one who’s interested in reading this.

And that’s about it for the pleasantries.  Here’s where we start the decline to the depths of book hell:

The details – they weren’t much.  I really wish there were more as far as drawing out the environments for the readers!  I totally bet this author could construct gorgeous landscapes and creatures if she just took a little more time to describe things instead of throwing us from one room to the next without any transition or mere description such as “cellar” or “bedroom.”  The reader’s aren’t given much to envision so good luck and start getting creative guys!

Another HUGE irk in mah birk is the Harry Potter like reference.  If you’ve read this you KNOW what I’m talking about.  The “You-Know-Who” that people are too afraid to say and the one person who sees that as giving him power so refuses to use “You-Know-Who…”  come on now… 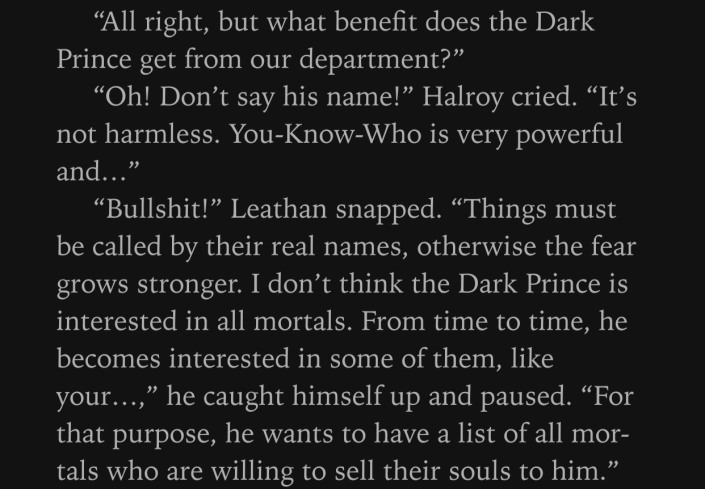 But we’re still not at the point where I’m ready to throw in the towel.  At this point, I was still very interested in continuing on to the 3rd episode.  The thing that completely made me throw in the towel and make me feel like I wasted my time on yet another poorly written ARC/Giveaway was the sexual ending.  DAFUQ DID THAT COME FROM?!  Now, I’m no prude by any means but 1.) this came out of absolutely frickin no where and 2.) rape is just crossing the line for me.

But gaiz, the 3rd book doesn’t redeem itself by any means.  I read the synopsis, because up until this weird turn of events, I thoroughly enjoyed this story, but the 3rd book is all about some passionate love making and the genie becoming a hardcore rapist… that’s where I end this train.  It’s one thing to be sexual but I picked a fantasy book not a fetish romance… I don’t want anything to do with rape, thanks.

And just so you don’t think I’ve completely lost it, here’s the synopsis from Goodreads for Episode 3:

NEVER BEFORE HAS PASSION BEEN MORE DANGEROUS.

Furious that once again the Genie and the witch Ezemalda escaped his clutches, the Dark Prince enlists the help of Lilith, the dark queen of sexual magic in his quest for revenge. Tricking them with a drink, Lilith bewitches Ezemalda and the Genie with obsessive sexual dreams. The Dark Queen’s plan backfires when Ezemalda comes up with an antidote, but she will not be stopped and implants a dangerous idea in all the kingdom’s subjects. With everyone around them now convinced that the Genie commits terrible acts against women, even rapes them, he and Ezemalda have to find a new way to stand against the dark forces and clear their names.

**DO NOT WASTE YOUR TIME WITH THESE NOVELLAS/STORIES/BOOKS** 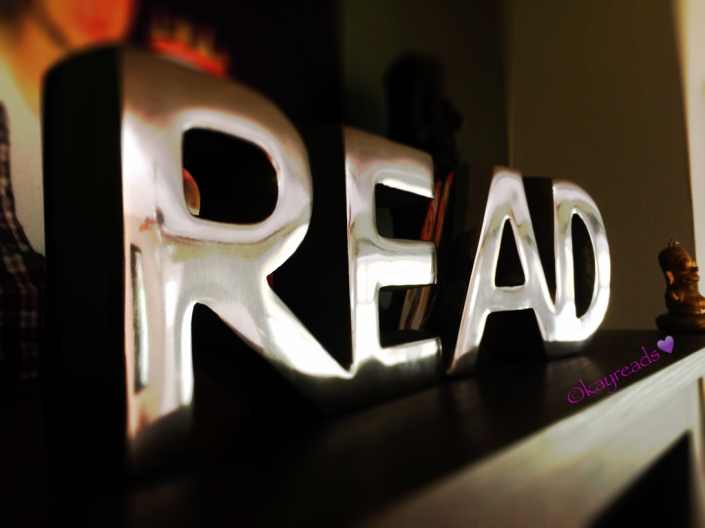 LOOK AT THESE BOOKENDS which of course I don’t intend to use as their purpose. I got these babies on 75% off clearance at my Barnes & Noble (originally: $60 sale price: $15)

So this post has absolutely no purpose except to let you guys know that I will not be posting this week, therefore, I have provided 3 new posts all at once down below for you to enjoy in my absence :] I am leaving today for Chicago to visit family and will be back Friday, so please hang tight!

Until Then,
Happy reading! ❤